Today we live in a world surrounded by rapidly growing and changing technology. It can be challenging for people of any age to keep up. One highly-relevant and potentially complicated aspect is social media. Social media was initially created to easily keep in touch with family and friends through the use of written or photo-oriented posts. Social media is commonly misunderstood as something to be used by only younger generations. This is a misperception because popular networks were created for no specific age group, and they actively cater to people of all ages.

Social media has rapidly grown in the past fifteen years and will undoubtedly continue to do so. Facebook was the first social media network to reach success at a high level. Following Facebook came many other social media networks of varying popularity. In addition to Facebook, other platforms such as Instagram, Twitter, and Pinterest have skyrocketed to the top seven most popular social media websites in 2020.

Younger people use social media more commonly because they grew up with technology. However, this does not mean older generations do not have a place in the social media world. In fact, these social media sites are accessible with the use of a smartphone, tablet, laptop, or desktop computer - whichever you prefer! Sometimes, social media's greatest challenge is not about understanding the technology itself, but rather understanding what each site has to offer

Mark Zuckerberg launched Facebook in 2004 after creating the software in his Harvard dorm room. One day after the launch, Facebook had over one thousand users, and after only ten months, reached one million users. Today there are 2.7 billion monthly users, making Facebook the largest social media network worldwide.

Facebook is used primarily to keep in touch with family and friends through photos and written posts. Eleven percent of all Facebook users are at least 55 years old, and it is estimated that 62% of online adults aged 65+ are on Facebook as of April 2020.

Facebook users (out of town relatives and grandparents, especially) love to see photos of their family members. Scrolling through their Facebook page to see people's posts allows these users to better understand how their loved ones are doing and how they spend their time. This helps users feel more connected, even from different sides of the country or across the world. This sense of connection has encouraged many to join Facebook as their friends and family members grow older and move away.

Instagram is a highly successful photo-sharing app created in 2010 by Kevin Systrom and Mike Krieger. It was sold to Facebook in 2012. Instagram tends to feel less personal than Facebook because many users follow celebrities, brands, and influencers, in addition to their family and friends. As a result, it is more commonly used by the younger set.

Although only 6% of the one billion Instagram users are older than 55 years old, there is still a lot for older adults to like about this social media network. Instagram allows for more creativity and exploration than Facebook, like posting about local events, new and popular restaurants, travel destinations, etc. Although these are only a few examples, there are millions of interesting accounts to explore on Instagram.

In 2006, Jack Dorsey created Twitter with the idea that he could send one text message to all of his friends at once. A post on Twitter is called a tweet. When someone tweets, it can be favorited, retweeted (reposted), or responded to.

Today, Twitter is commonly used among the younger crowd as a comedy blog where users post written jokes or memes (photos with funny captions). Older users more frequently use Twitter as a news source to see fast and frequent updates from topics and people they care about.

There are different categories on Twitter titled For you, Trending, News, Sports, Fun, and Entertainment. Not only can Twitter provide live updates on sporting events, but it can also provide updates on local, national, and world news. Politicians have become popular Twitter users over the past few years, especially leading up to the 2020 presidential election. Of all the social media networks, Twitter has the highest percentage of users over 55 years old (28% of the 330 million active users).

Ben Silbermann founded Pinterest in 2010 with the idea that people can use this website as a visual discovery tool to find and share inspirational ideas about hobbies and interests. Users post about art, design, decorating, fashion, photography, etc. Posts can be "pinned" (saved) into organized folders by category.

Each posted photo can be clicked to find a page labeled "More like this." This will produce a list of related posts. Some posts have a website link attached to where the listed item was purchased. These features and many others, help users quickly find what they are looking for and have contributed to Pinterest's popularity among all ages. Users aged 50 and above account for 12.2% of the 320 million Pinterest users. Pinterest's popularity among all ages arises from the fact that creativity has no age limit.

Want to join Pinterest? Read our blog, Find Your Inspiration: A Guide to Getting Started with Pinterest, to learn how!

TikTok is a video-sharing app that allows users to share videos up to one minute in length.

In 2017, Zhang Yiming launched TikTok internationally after previously being available only in China under the name Douyin. Within the first year of international release, TikTok had 500 million users. In October 2018, TikTok became the most downloaded video app globally. Today, TikTok has 689 million active global users, surpassing the popularity of Twitter and Pinterest.

Even though 62% of TikTok users are between the ages of 10-29 and only 4% of users are above the age of 55, many seniors on the app have become viral by connecting with younger users.

To get started with TikTok, check out our blog, TikTok: Start Creating and Exploring!

Now that you have a better understanding of what these four popular social media networks have to offer, you may be asking what concrete steps you can take to use them. Subscribe to the Cantissimo Senior Living blog, so you don't miss future posts describing how to create accounts and dive deeper into these social media networks.

In this blog series, we have reviewed the processes of creating and setting up accounts for Facebook, Instagram, Pinterest, and TikTok. In this blog, we will explain how... 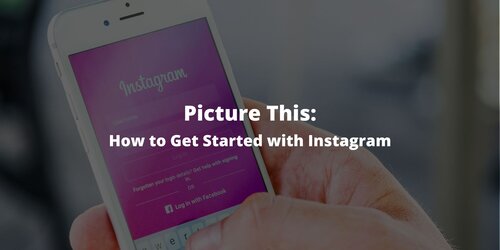 In related blogs, we explained the differences in social media websites and reviewed the process of setting up accounts on Facebook, Twitter, Pinterest, and TikTok. In...